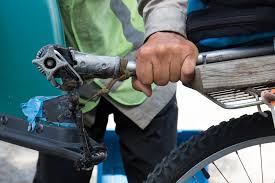 A few weeks ago on Saturday afternoon, I was walking on the sidewalk a few miles from downtown Indianapolis. I was walking to my truck outside the Tamale Place when I saw a homeless man walking towards me. He had a camo backpack and a bike. Obviously, I did what most people would do… I walked faster. My truck was close, so I veered off the sidewalk. Then my heart sank when the man said something. Honestly, I have no idea what he said, but I knew he was talking to me. As I turned, I saw a man in his 30s pushing a broken bike with an orange shoestring holding both the bike and his pants together. The shoestring wasn't working. His insulated pants were ripped from his waist to his ankle with a gaping hole and insulation was spilling out. The frame of the bike was all out of whack. He looked desperate. What's going on here?

The man said, "I am going to Terre Haute and I need a ride to Avon."

Ok, Lord… Do you want me to take this man to Avon? Seriously?

Immediately, two things rushed through my mind. Don't be like Jonah—have compassion. Be like the early church—live with courage. The combination of compassion and courage gave me only one option. I said, "Yes."

The man said his name was Joe. For the next couple hours, I was hanging with hobo Joe.

Joe loaded his "donkey" into the back of my truck. Apparently, a donkey is a bike. Joe found this donkey earlier that morning in a dumpster in an alley. To me, it was clear why this donkey was laid to rest in a dumpster. Even though Joe's shoestring didn't hold the bike together (or his pants), he was thankful to have a donkey.

As Joe told me his story… and a lot of other stories, two things became crystal clear. Joe is a guy who has been far from home and now he really wants to get home. Joe's home and family is in Terre Haute. He's only one hour away, but this a long way to travel on a broken down donkey.

It's been a year since Joe was last home. For eight years he's been jumping trains and sleeping under bridges. The rail yard in Avon was his next stop. This was the last stop separating him from Terre Haute. This would be his last afternoon holding a cardboard sign. This would his last night sleeping outside.

Tomorrow things would be different. Tomorrow he would be home.

I asked Joe if he was hungry. He said, "Yes." As I pulled into Chick-fil-A, Joe didn't want to go inside. So we went through the drive-thru instead.

Joe used my phone to make his weekly phone call. He called his brother, momma, and grandma. This took multiple calls but eventually, he told them, "I am alive and I am coming home."  I've never made a phone call like that.

Listening to Joe talk with momma on the phone… it became clear, Joe is a prodigal son. Yet, he was coming home. His family was only one day away. Jumping a train was the only thing stopping Joe from being with his momma. This was really cool. I could hear the excitement in his voice. His whole body changed. He's coming home! A party was being planned.

Joe gave me back my phone as I parked at Wal-Mart. I wanted to go in and pick up a few things—especially some pants. But Joe didn't want to go in. Ok, no problem.

"Let's go to Goodwill. They got pants," Joe said.

It just so happened I had a rack of dress shirts and sweaters in the backseat of my truck. These were clothes from Krista's grandpa who passed away a few weeks back. These were given to me because apparently, my style is that of an 87-year old man.

"Joe, I have some shirts in the back if you want something." Joe wasn't impressed. "I don't want anything white."

In the parking lot of Goodwill, Joe rummaged through Grandpa's shirts. Then inside Goodwill, Joe found some pants and socks. He was happy.

"Joe, it was cool hanging out with you today. I think God brought us together." Joe nodded. "I don't know what time you are leaving, but you should come to church with me. You're gonna like my church."

I never realized how much I love saying "You're gonna like my church" until these words came flying out of my mouth with all sincerity to a homeless man who hasn’t showered for days, weeks, or months?

"Joe, you're gonna like my church."  I knew if Joe came he would totally stand out… but I also knew people will talk with him. People will love him. People will shake his hand and smile. I don't know Joe, but I know our people.

I took a quick selfie with Joe. "I want a picture with you so I will remember to pray for you. Is that ok?" After the picture, Joe prayed for me.

Joe saddled up his donkey and headed towards the woods behind Goodwill to settle in for the cold, Indiana winter night.

The Sunday Joe attended was our 10-year anniversary. The worship center was filled with a sea of gray Big God shirts. Right at 10 AM, Joe walked in. He was promptly on time for the 9 AM service… except, Day Light Savings Time made him miss the first service by one hour.

Joe was wearing Grandpa's blue sweater under his raincoat. He was also wearing his new pants. Security tailed him as he sat on the floor in the back of the worship center. He missed most of the service, but he was there just long enough to have tears streaming down his face.

"Hey, Joe! I'm so glad you are here. You have to stay for the second service. Let's go get some cake!" Joe liked the cake. Joe really liked the coffee.

Joe stayed for the second service. He sat on the floor but eventually moved to a seat in the back row. Again, tears were streaming down his face. He wasn't the only one.

Sunday afternoon, I got a text from someone in our church,

I picked a guy up off the road. Name was Joe. He said he visited our church this morning. We talked a bit.  He's camping in the woods next to Goodwill. He wants to stay another week so he can come back to church. He said we have an awesome church. I like him. He was a nice guy. It's funny… he wants to stay another week for church instead of going back home to Terre Haute? That's where his family is.

Can you imagine being so close to home with a warm bed and hot shower after eight years of sleeping under bridges, scrounging through dumpsters, and jumping trains… and thinking maybe I'll stay another week so I can go to church? Why not, it's just a week. Seven more days without food. Seven more days holding a cardboard sign and being stared at. Seven more nights shivering on cold cardboard with a worn out sleeping bag. How is 90 minutes of church worth a week of homelessness? Momma is so close. I can see the tracks. I hear the train. Home is only an hour away… but maybe I'll stay?

Experiencing God's Word, God's Spirit, and God's people has a strange effect. You want more. Priorities change. You don't want to leave. You want to stay. And you want to come back. When Joe sat in the back row and I saw tears streaming down his face… I knew Joe liked my church.

Welcome home, Joe, I hope you come back.

What We Do: Encourage and Serve One Another

Messengers of the Gospel

What I Do With My Day Off: Pastor Eric