What Happened When I Turned My iPhone Off

This year, Apple is celebrating 10 years since the original iPhone was announced and released to the public by Steve Jobs.  In 2007, Time Magazine named it the “Invention of the Year” and now—10 years later—I think we can say that was an understatement.  The iPhone has drastically changed the way we view, do, and consume: communication, entertainment, photography, the internet, music, videos, news, and the list goes on.  The impact the iPhone and the subsequent Smartphone genre has made is profound.

I Had To Have One

I was an early adopter.  I’ve always loved all things technology; from the first Nintendo I had growing up, to the Palm Pilot I had in college, and then the flip phone I bought in the early 2000s.  When the first iPhone came out in 2007, I loved the idea of having a phone, an iPod, and the internet all in one device in my pocket.  It seemed like it was made with the Worship Pastor in mind.  I had to have one!  So when I came on staff in November of 2007, one of the first purchases we made were phones. Doug agreed an iPhone made sense for what we did.  I unboxed this shiny marvel of technology, and everything was magic!  It responded to my fingers and gave me access to everything I wanted, whenever I wanted it, and went everywhere with me for the next 10 years.  Over time, its reach into my life expanded to e-mail, text messages, social media, Netflix, Candy Crush…you get the idea.  Then, in May of 2017, I turned my iPhone off.

My family was given the generous gift of an 8 week sabbatical that began May 8, 2017.  A friend of mine, who is also a pastor and was able to go on sabbatical a year earlier, gave me the advice to turn off my iPhone during the 8 weeks.  I respect this friend, and so, by the grace of God, I decided to listen.  As we began our sabbatical, I turned my iPhone into an iPod and told my wife Jill that I was only going to use it to listen to music and preaching, and that was it.  And so my journey began.

It had only been a couple of days without my iPhone, but I was astounded by how quiet my life had become.  Social media was gone; news feeds were gone; my church e-mail, phone, and text messages were gone; all my notifications were gone, and all of the other things that usually and easily distracted me were simply gone.  I would check my pocket  just to pick up my phone to turn on the screen and make sure it still lit up properly!  I remember feeling a little lost and very uneasy about all of this.

It only took a few more days of detox from my iPhone for me to look at Jill and say, “I think I might be addicted to my phone?!?”  The expression of bewilderment and relief on her face spoke a thousand words.  She had been telling me for years that I looked at my phone too much, but I would always just shrug her off and tell her I was fine.  I was, for the first time in 10 years, realizing I wasn’t fine.

I began (with all this extra time I found myself now having) thinking through what was going on with my phone and analyzing my days.  My iPhone was the first and last thing I looked at every day.  It was the first thing I turned to when I had a spare moment in any day.  I began to recognize that I was ignoring the people around me, including family and friends, so I could retreat to my phone. I was hardly ever fully present in most situations in life because I was constantly distracted. My phone was “telling” me every minute of the day what should be the most important thing. Facebook, Twitter, and Instagram were my “people connections” in spite of the actual flesh and blood people right around me. I treated every notification like the most important thing in that moment.  I was allowing my phone to sabotage all of my relationships, including my relationship with the Lord.  I wasn’t fine, and I needed to change.

I can honestly say I don’t think I would have seen any of these problems had I not turned off my phone.  For me, it took completely unplugging to wake up to the reality of how addicted I had become. I repented to my family and the Lord. I began telling my story to many of my close friends so as to invite accountability.  I didn’t decide to go back to using a flip phone, but I have put several new “fences” around my iPhone usage. One fence being, as soon as I come home for the day, my phone is turned to “Do Not Disturb” and has a home for the remainder of the evening (and it’s not my pocket). I check it usually one to two more times before the day is over to make sure there are no urgent needs, which (if we are all honest with ourselves) almost never happen.

Don’t get me wrong, I still enjoy technology and using my iPhone, and the reality is that having a Smartphone can be an amazing tool for ministry and life when your phone works for you. My problem was that I was working for my phone.

What would happen in your life if you turned your phone off?

If you are Interested in exploring more about how your phone has affected your life, I would highly encourage you to check out this book. 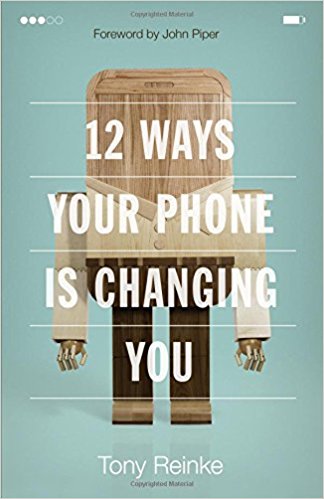 Being His People... Wearing Masks as Surrendered Service